A 7-node server cluster would be terrible to monitor if you had to SSH and top every individual node. Thankfully, that’s where Grafana and Prometheus come in to save the day. After much finagling with Kubernetes manifests and general pain, I learned about Helm Charts, which is essentially a package manager for Kubernetes. I have a Helmfile set up to essentially declaratively deploy my Charts, as well.

So, I got Prometheus and Grafana set up using the prometheus-community/kube-prometheus-stack helm chart, which bundles all the metrics stuff together into one nice package. I also redeployed my logging stack using the bitnami/fluentd, fluent/fluent-bit, elastic/elasticsearch, and elastic/kibana.

KaaP: Kubernetes as a Paparazza

This is it! I’m finally running something on this godforsaken cluster!

At the last IndieWeb Homebrew Website Club (HWC) I attended, someone suggested to me that I could somehow have a live feed of my 3D printer. Although I can’t have a live feed because I have a slow internet connection, I can take a picture every few minutes and upload it to my server.

So, I added a new endpoint to my API server, then wrote a small script that does exactly that. It scrapes data from my OctoPrint instance’s API, snaps a picture from the exposed MJPG-streamer endpoint, and sends a PATCH request to my API server with all the information. I Dockerized it using python3.9-alpine for minimum image size, and created a CronJob for my cluster that runs the script every 10 minutes:1

I deployed it and found that my script was broken. However, I was tired, so I just went to bed.

When I woke up the next morning on Wednesday, I saw the weirdest thing happen on Grafana.

There were these strange, very noticeable spikes in memory consumption every few minutes. Worse, they seemed to be 1 GB tall!

How bad could my Docker image be? It runs Python, which isn’t exactly a lightweight runtime, but it wouldn’t be 1 GB either. It stores a very low-res JPEG of my printer in RAM, probably at most 30 KB, and it doesn’t send much extra data.

My mom’s old laptop was also running at 18 load (it has 4 cores, mind you) because Elasticsearch got assigned to it, but I didn’t pay it much mind.

I continued debugging my script that afternoon, checking for, well, honestly, I don’t know what would be causing it. In a stroke of bad luck, Docker Hub happened to be freaking out on that day/week and taking extremely long on my builds, and not because I wrote inefficient code. Here’s an image from my API server’s repository. Yes, those are 177-minute queue times and 252-minute build times. But that had nothing to do with my problem, it only made debugging and testing cycles harder.

I did eventually get the script working (see the second image here for now, but I will make a dedicated page for it eventually).

Then, after demoing my printer images it during the HWC meeting, I remembered: there was one Elasticsearch pod that was always crashing because it kept going OOM on my mom’s old laptop, wasn’t it? So, I added a new graph to my dashboard called “Poorly-Terminated Containers.” It’s a heatmap of container terminations that aren’t because of Completed.

According to this graph, my printer paparazza stopped crashing halfway through the afternoon when I fixed it, but my logging namespace continued doing so. 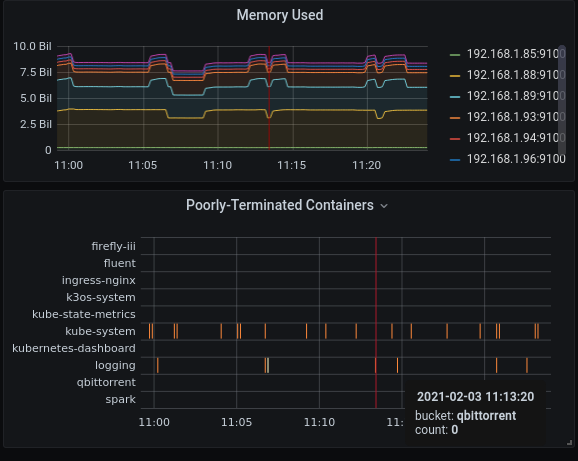 And sure enough, every one of these crashes seems to correspond with that 1GB drop in memory usage.

Yeah, it’s Elasticsearch being too damn big and getting killed for it.

I tried tweaking Elasticsearch a bit, maybe running it on my Raspberry Pis instead, but I wasn’t able to really do much. So, I shut it down and freed up 2.5 GB of memory across my entire cluster, which is 1/3 of what I use in total. Given that my cluster is composed of very small and low-powered devices, I don’t think Elasticsearch is a very good option for me. I’ll have to look into more lightweight logging systems. I’ve heard Loki is a good option, and there is a Fluentd plugin for it.