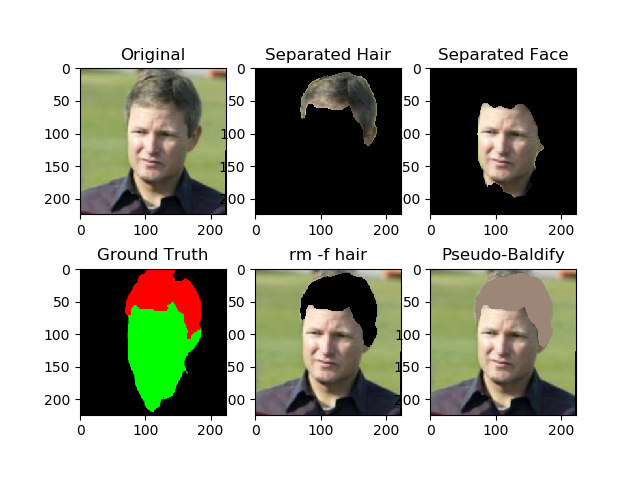 A convolutional neural network (CNN) that can detect a person’s face and distinguish between their face and their hair. It was successfully able to accomplish this task in real time.

It was originally going to be a component in an image processing pipeline that would allow the user to simulate different hairstyles. The missing components for this were:

The network was inspired by the existing VOC-fcn8s network, though I reduced some of the layer count parameters to make it run faster on my machine.

Essentially, this network is a member of the family of networks known as Fully Convolutional Networks, or FCNs. As their name suggests, they are only composed of convolutional or deconvolutional layers.

In terms of architecture, it’s a lot like an autoencoder. See the following graphiccite1 for an illustration. It shrinks the data down to a manageable size using convolutional and pooling layers. When it’s very small (7x7) it performs scoring with the center layers. In the final layers, it rescales the scores back to original size by adding data gathered from the shrinking.

There were many issues encountered in some of the earlier trained networks, but they were easily solved by training on a synthetic dataset generated from my training data. util.py contains most of the code used to do this.

I could potentially host this neural net on a webpage using Tensorflow.js.