I wanted to run Android games (specifically Arknights) on my NixOS box, but Anbox seems to be broken on NixOS. So, I figured out a way to make it work in Libvirt. Other people wanted to do it too, so here’s a guide.

You’ll want to create a new VM with the downloaded ISO as your boot disk. When prompted for the type of OS, select Android 9.0.

As for specs and storage space, you should consider how much space and power the games you’ll play want. I just went with 4 cores and 8gb RAM, but 8gb might admittedly be overkill.

Before booting your machine, make sure to do the following things to your VM’s configuration:

Pretend your internet is Wi-Fi

Android doesn’t like ethernet connections for some reason, you’ll want to set your NIC to use the rtl8139 device, which emulates a wi-fi card. 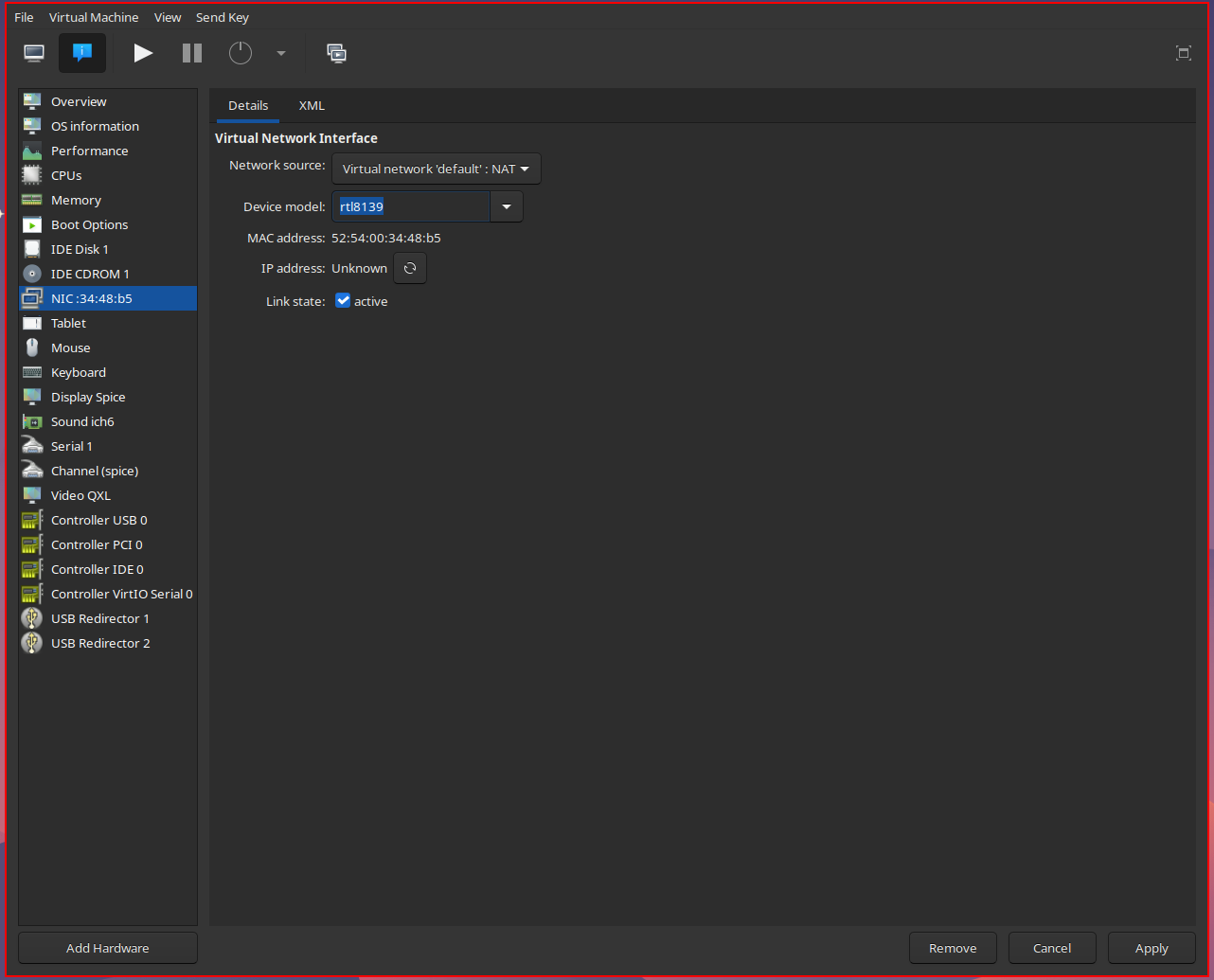 Go into the Video device, and set it to Virtio. Make sure to check the 3D acceleration box. However, you aren’t done; if you run the VM now, you’ll get an error complaining that it can’t find OpenGL. You need to go to the Display Spice device and set “Listen type” to None, and check the OpenGL box. OpenGL will ask you for a GPU to use (given by their PCI addresses) so select the one you want to use, or Auto to have it guess. 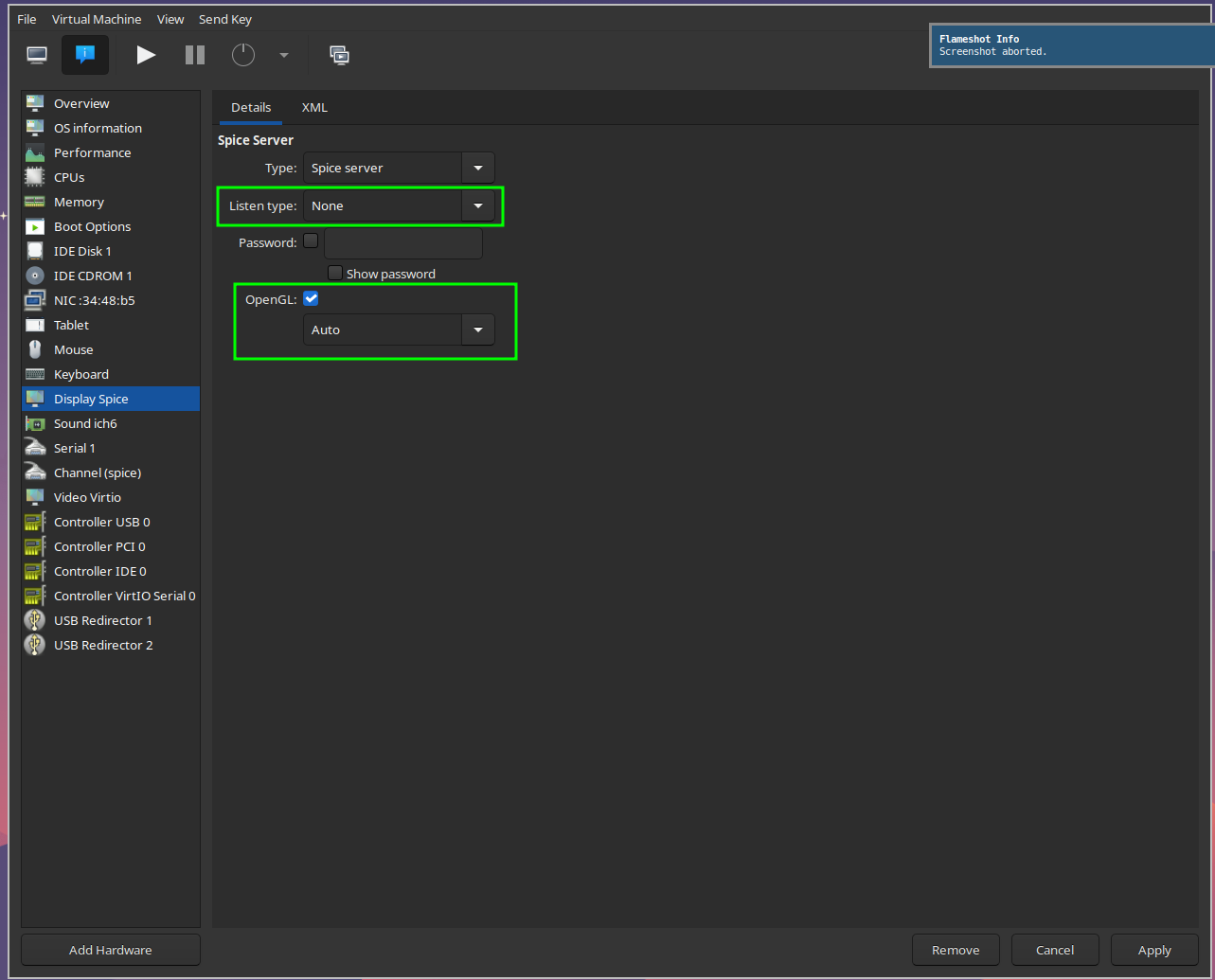 Run your VM and you’ll be greeeted with this screen. Just go to the “install” setting. It will ask you to pick a partition, but there’s no partitions, so you’ll have to use the built-in partition manager. 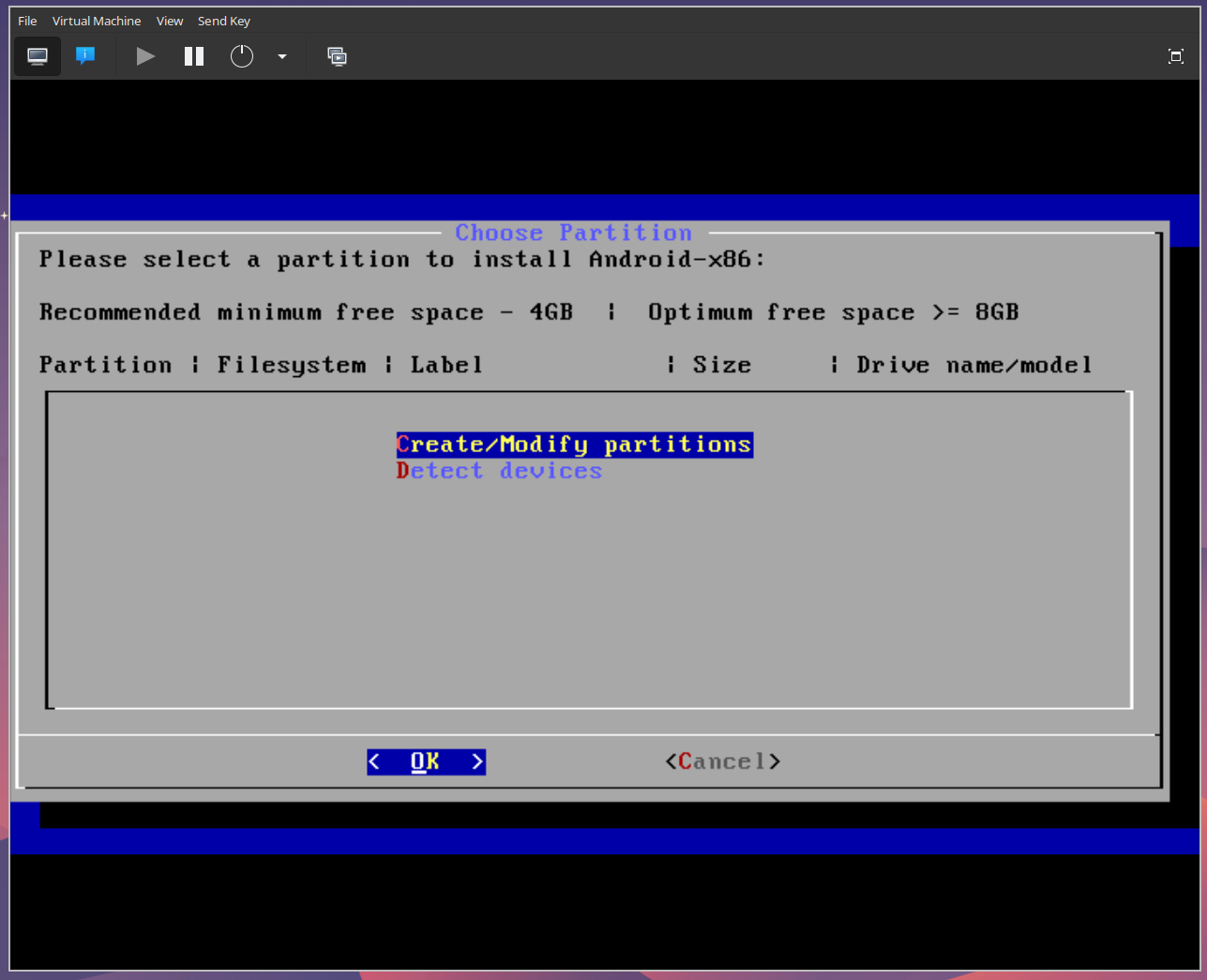 You’ll just want to create a MBR partition table with 1 partition on it. 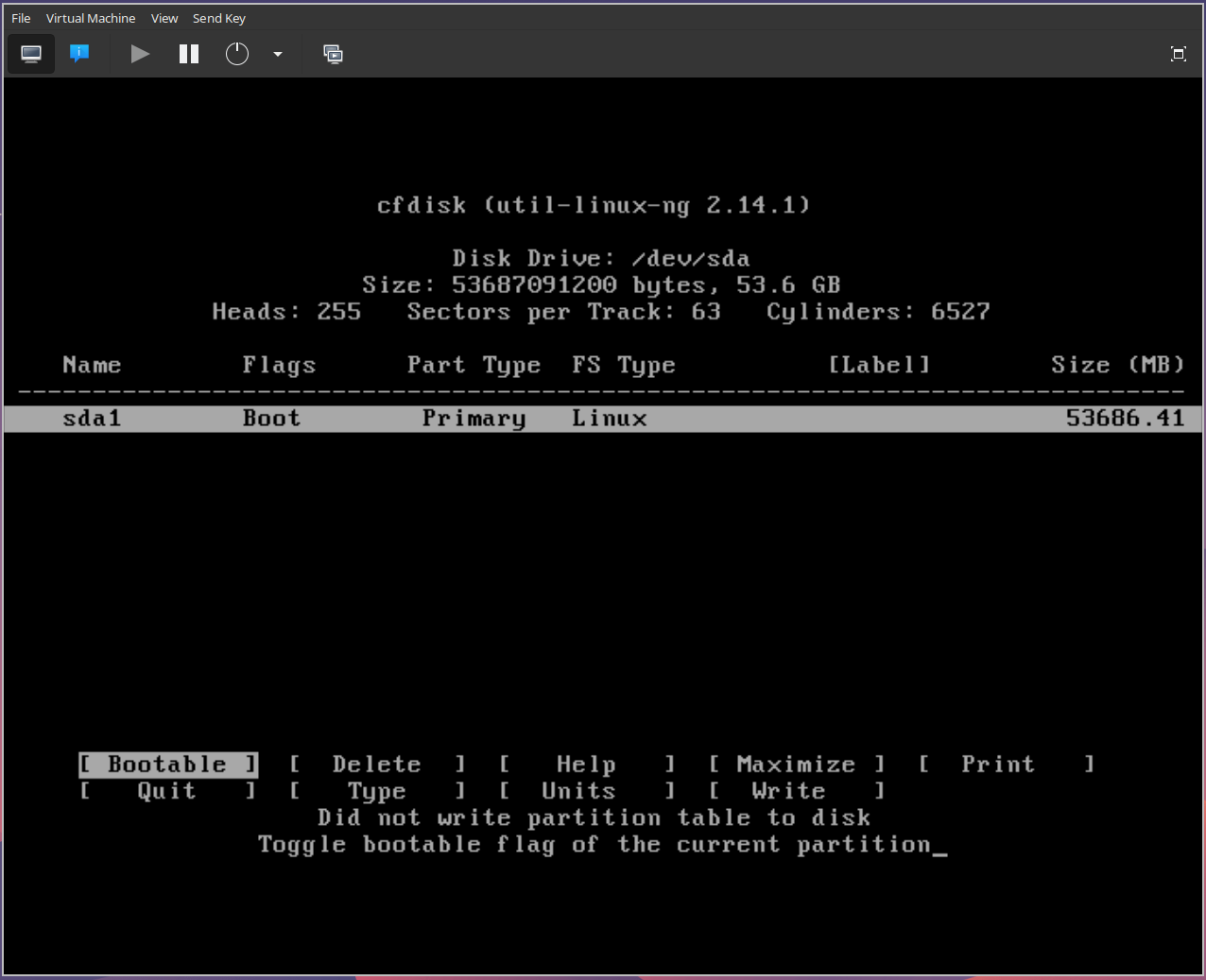 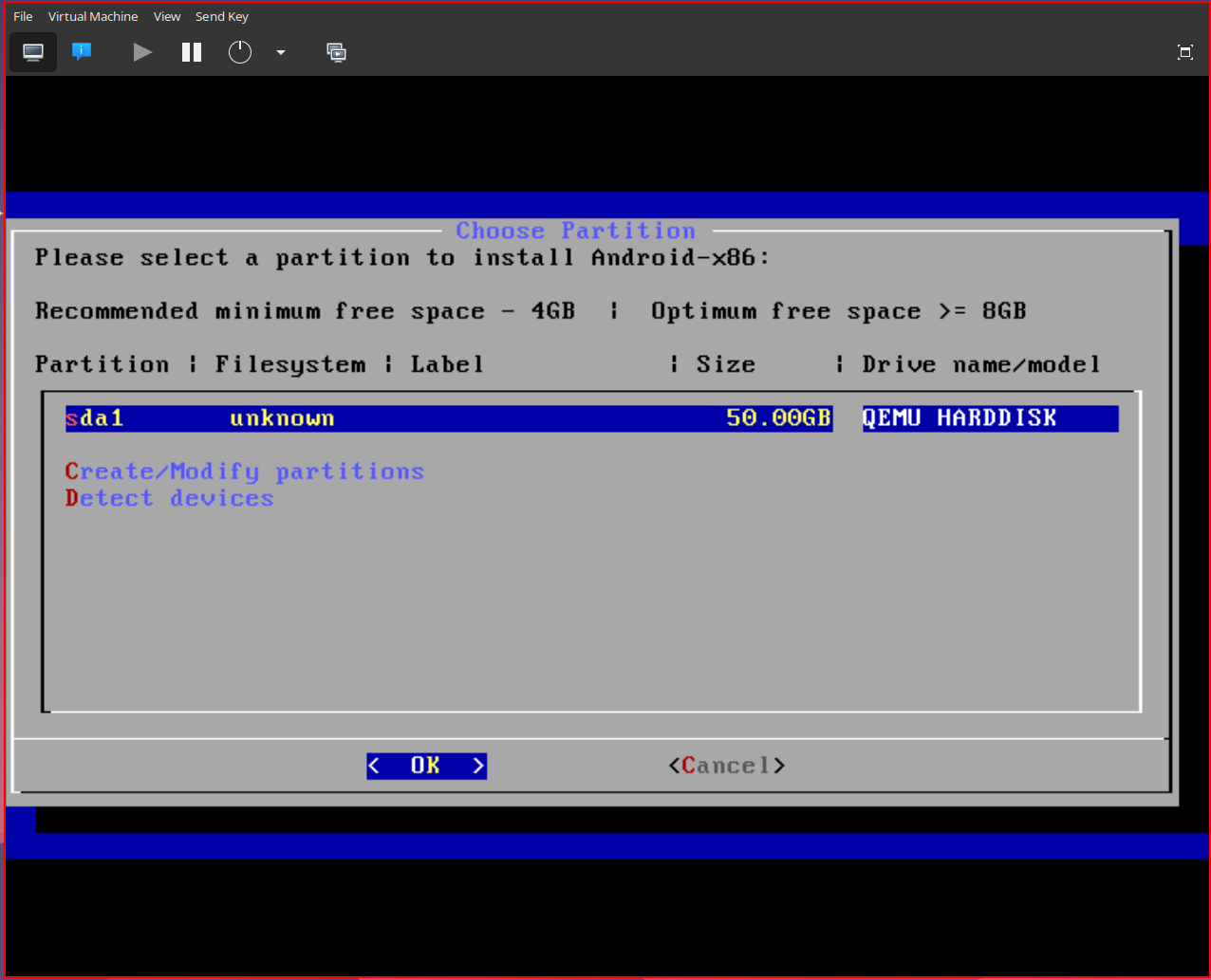 Then, when you quit the partition manager, you can select that one partition, and follow the wizard:

Then, you’re all done with installation, and you can reboot.

3. Booting and setting up Android

If all goes well, Android will boot and go into the setup screen. 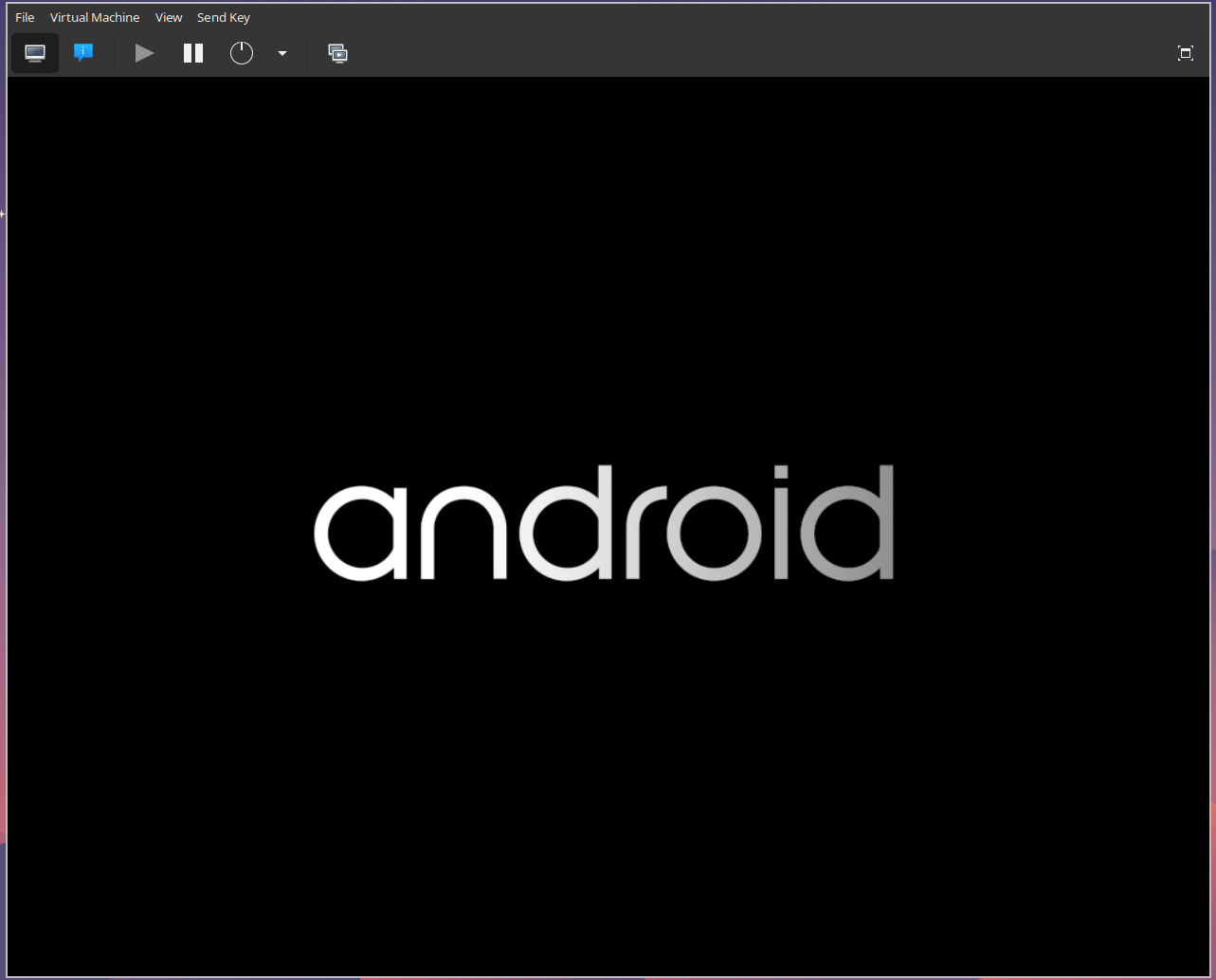 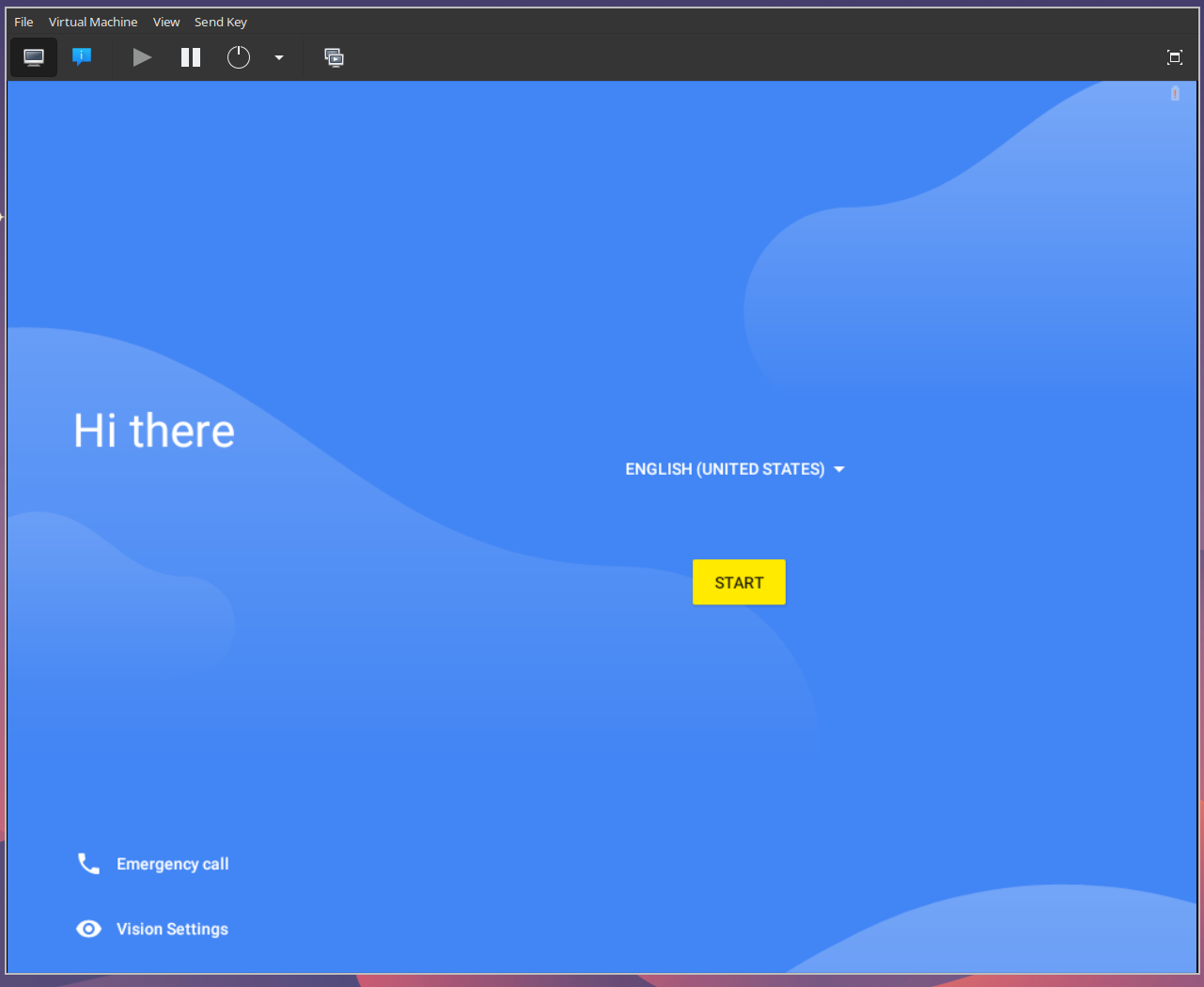 Now, just set up the machine like any normal Android device. 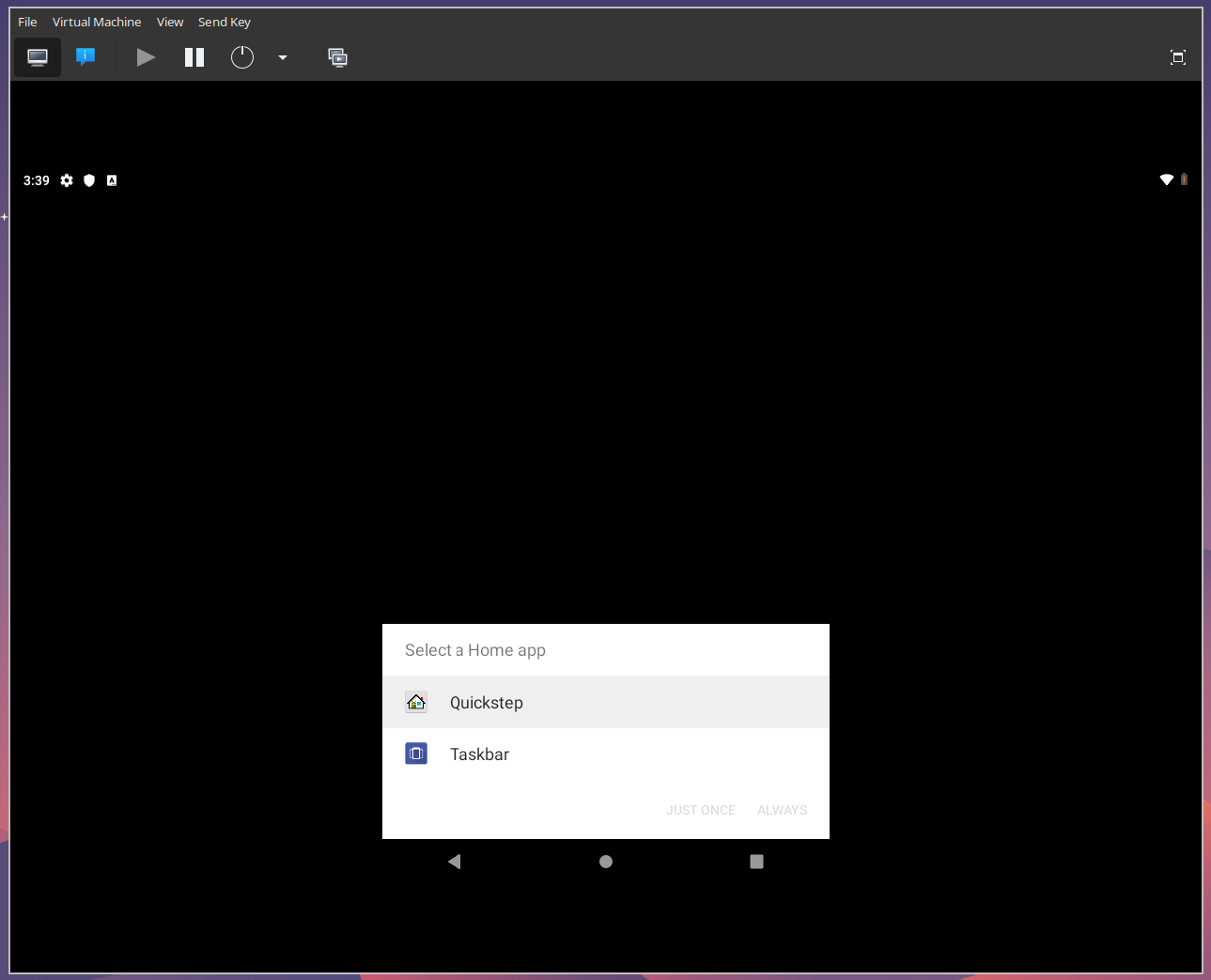 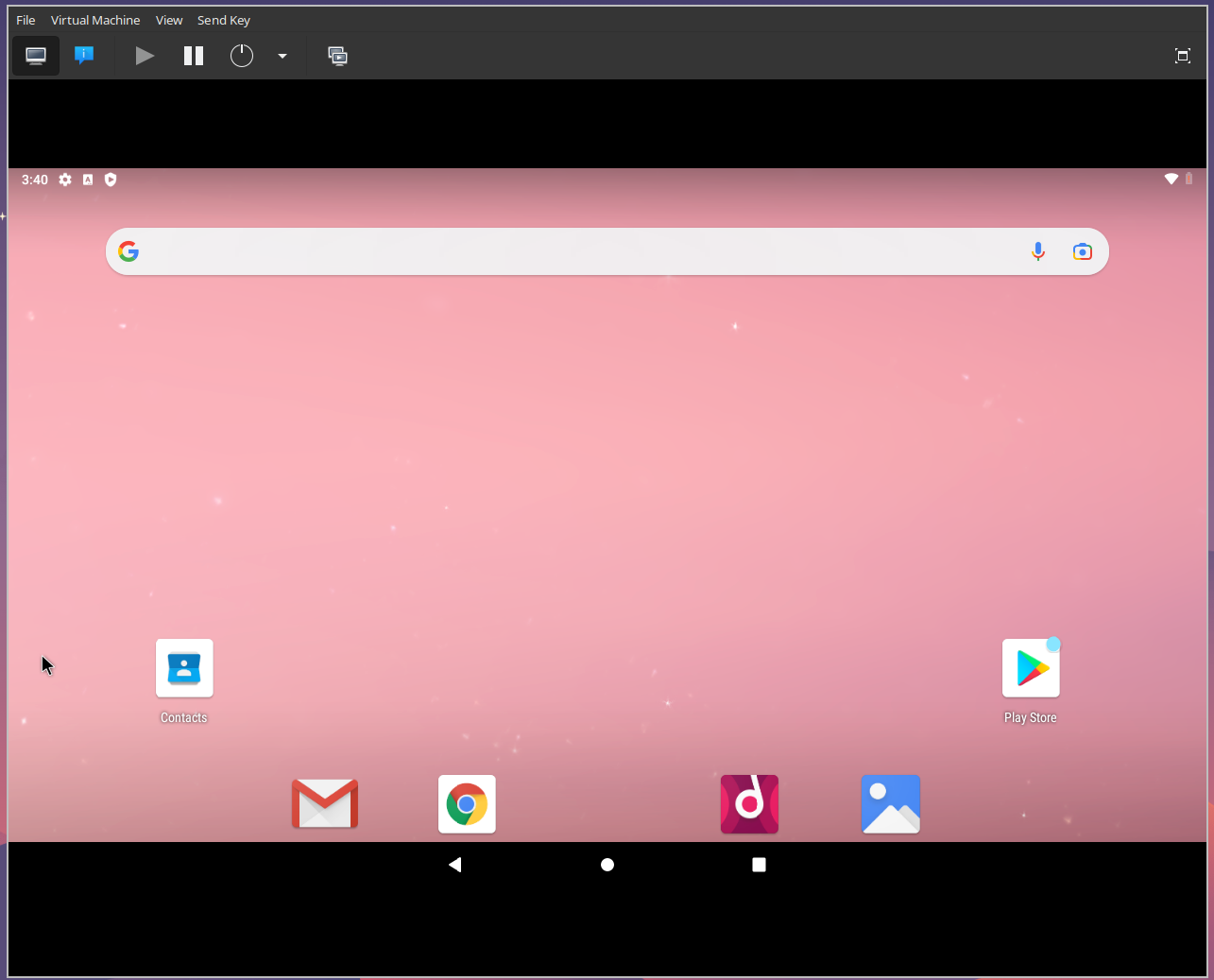 4. Install your games or whatever

It doesn’t matter if you install your apps before or after setting up ARM translation. I prefer to do it before so that I can take a VM snapshot and not have to download so many things in the next (somewhat error-prone) step goes wrong.

Your games might crash on boot. That’s okay, we fix it in the next step.

This step is needed to play games that are only packaged for ARM. Note that some games might trick you and pretend they work on x86 and install properly without warnings (I’m looking at you, Arknights), but they’ll crash on start. It’s just safest to do this step first.

Open up the Terminal Emulator app and start running commands!

obviously puts you into root mode. You might need to say “yes” to a confirmation.

The -O flag is especially important because it needs to be in a very specific spot on your filesystem!

Also, Android’s version of wget doesn’t seem to like https, so you’ll just have to deal with http. Shoulda thought about that before getting MITM’ed.

For some reason, these files are missing when you install Android-x86, which is really weird because you’d think that they’d be very important files. No matter; it’s required as a workaround for the next part.

This script does a bunch of things (good things, I’d hope) but it seems to enable the ARM translation

e. Check it in the settings

Once all of these steps are done, you should be able to play ARM games inside the VM! If not, try rebooting. If that still doesn’t work, then I don’t know. 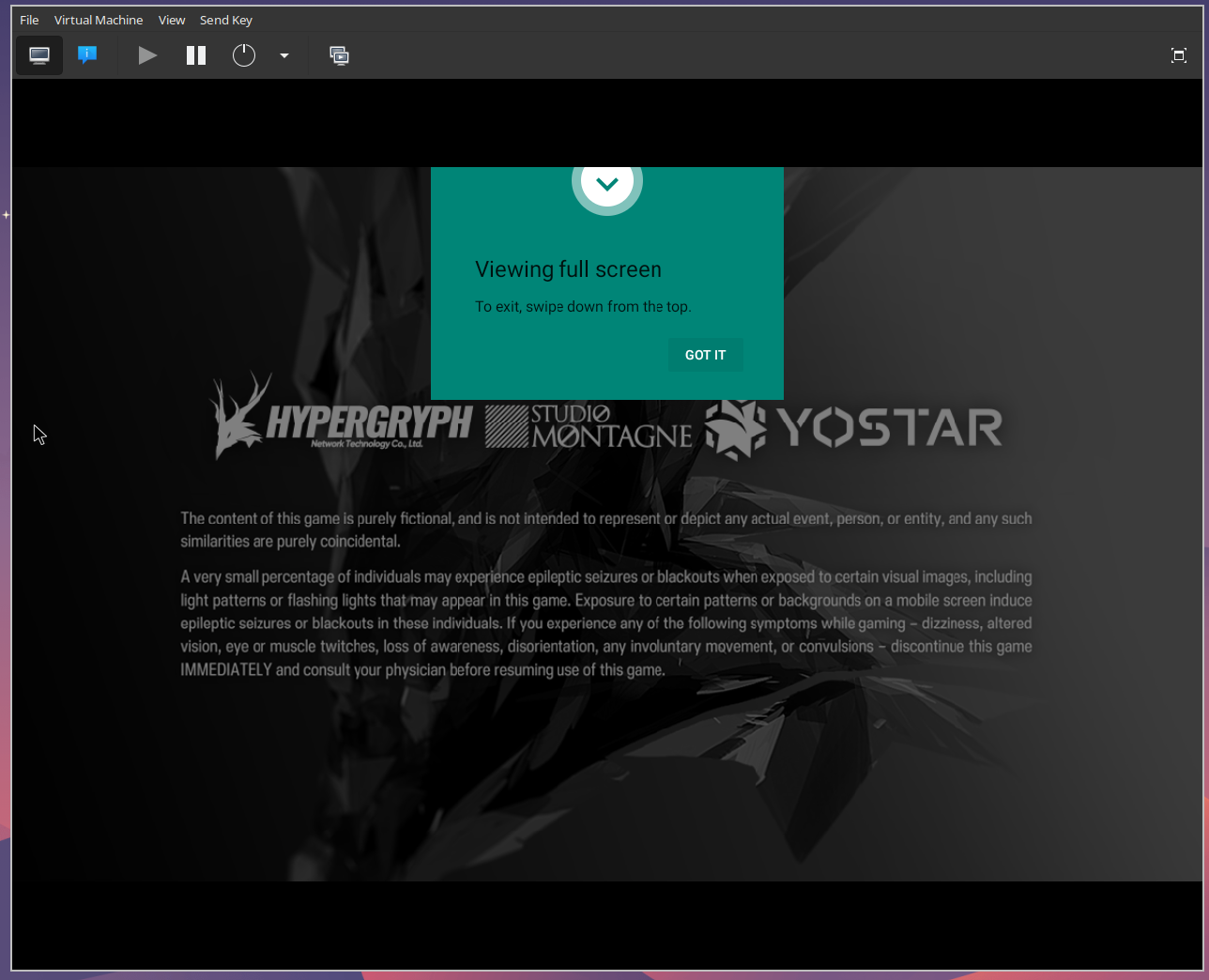