Strap in kids, this post is about me physically hacking apart Amazon’s Blink Mini to get access to its firmware! No firmware was harmed or modified in the making of this post… yet.

Big thanks to Ada and Erin for helping me figure this stuff out! 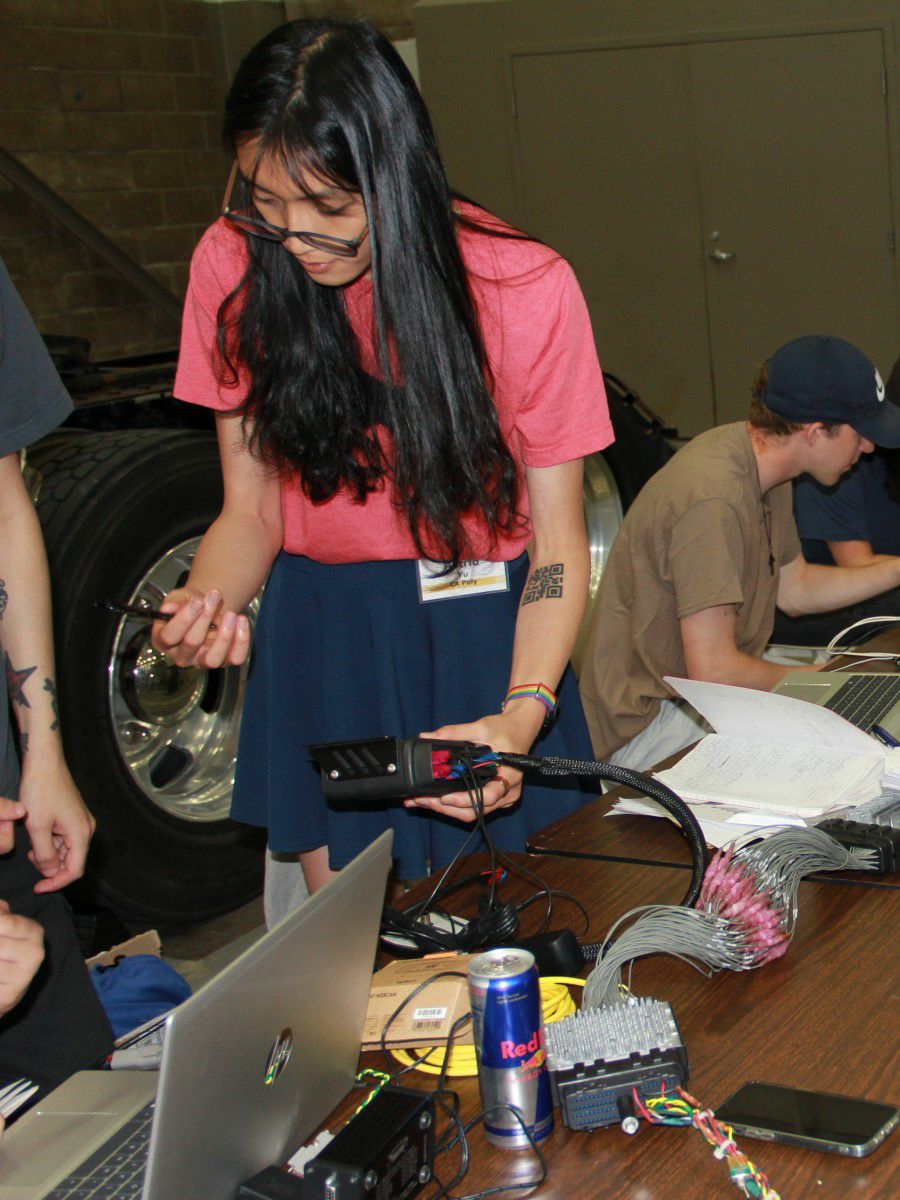 Anyways, with what I gleaned from the 20 hours of instruction and 20 hours of hacking, I decided that I should apply what I learned to a real device! These $20 Blink Mini cameras that I bought a few months ago seemed like perfect victims to fuck around with! About the Blink cameras

These cameras are cute little things that have a surprising number of capabilities:

Unfortunately, you need to use the Blink app to do anything with this camera. It’s free, but it’s only a phone app (thye don’t have a web app) and if you want to record videos, you need to subscribe to their Blink Premium service, which costs $30/year for one device and a whopping $100/year for more devices! It’s also probably why the hardware is so cheap — they made it a loss leader for that service.

Hypotheses before breaking into it

I have 3 of these guys, and they’re relatively cheap anyways, so I didn’t mind having one sacrificial lamb. I basically just started savagely pulling it apart and cutting things up and hoping that I could reach the PCB. 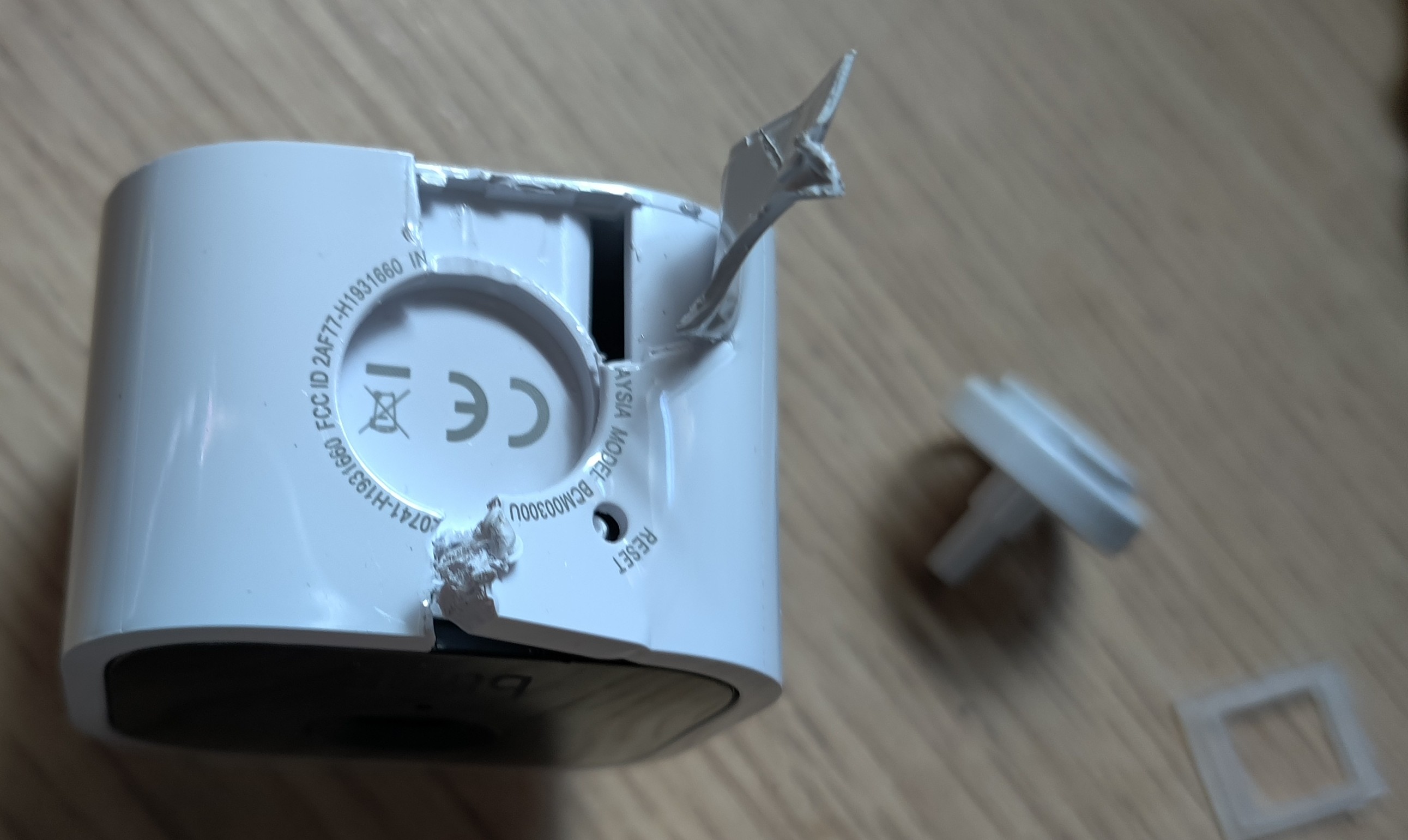 But then I realized that maybe, this isn’t the correct way of opening it up. Perhaps, someone else has done a teardown of it. In fact, I found this YouTube video where someone did just that.

Wow, that was so much easier than I thought it was! 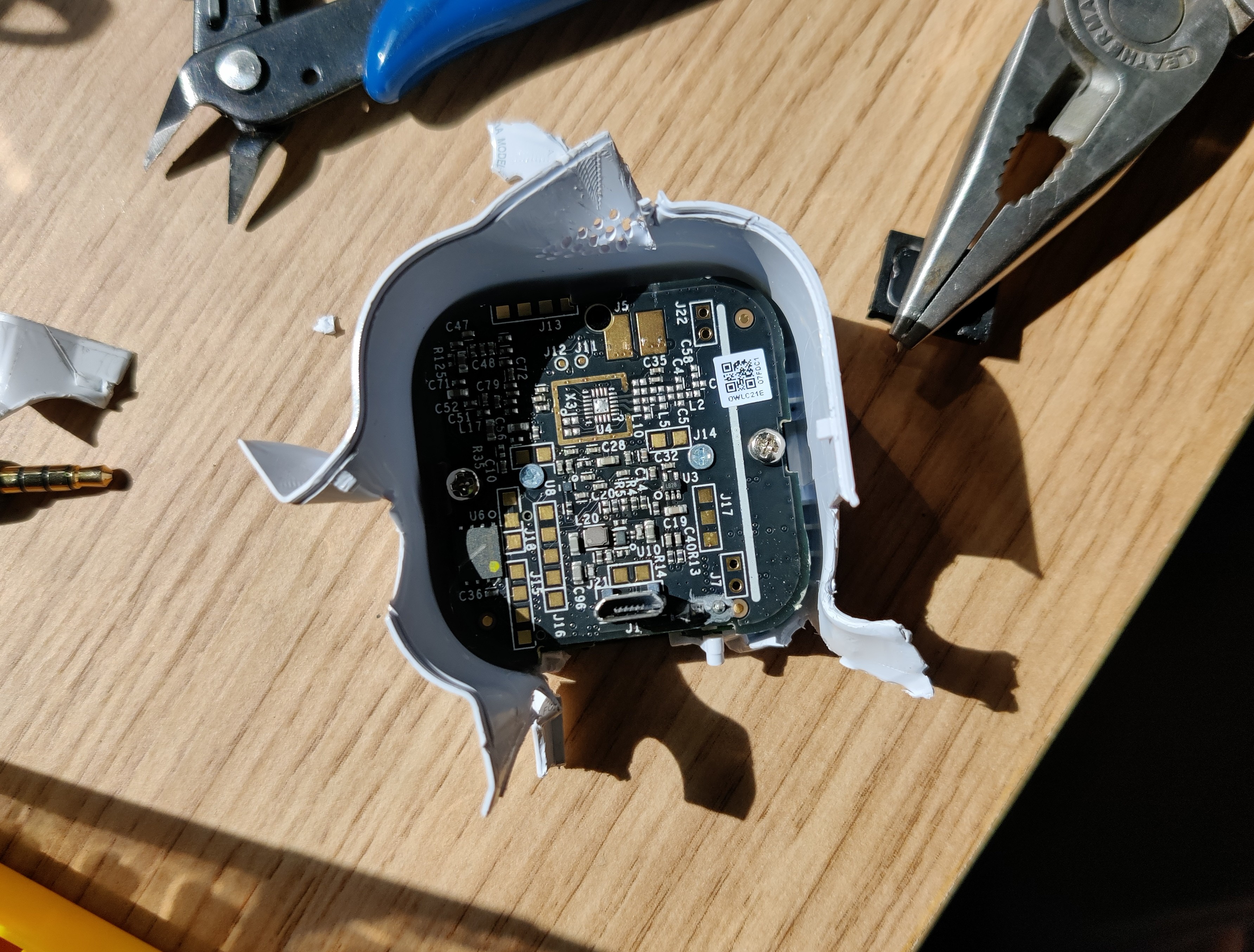 Staring at the circuit board

There are actually two PCBs here, with a 26-pin header for talking between the two boards. One is the wifi/antenna board, and the other seems to have everything else. 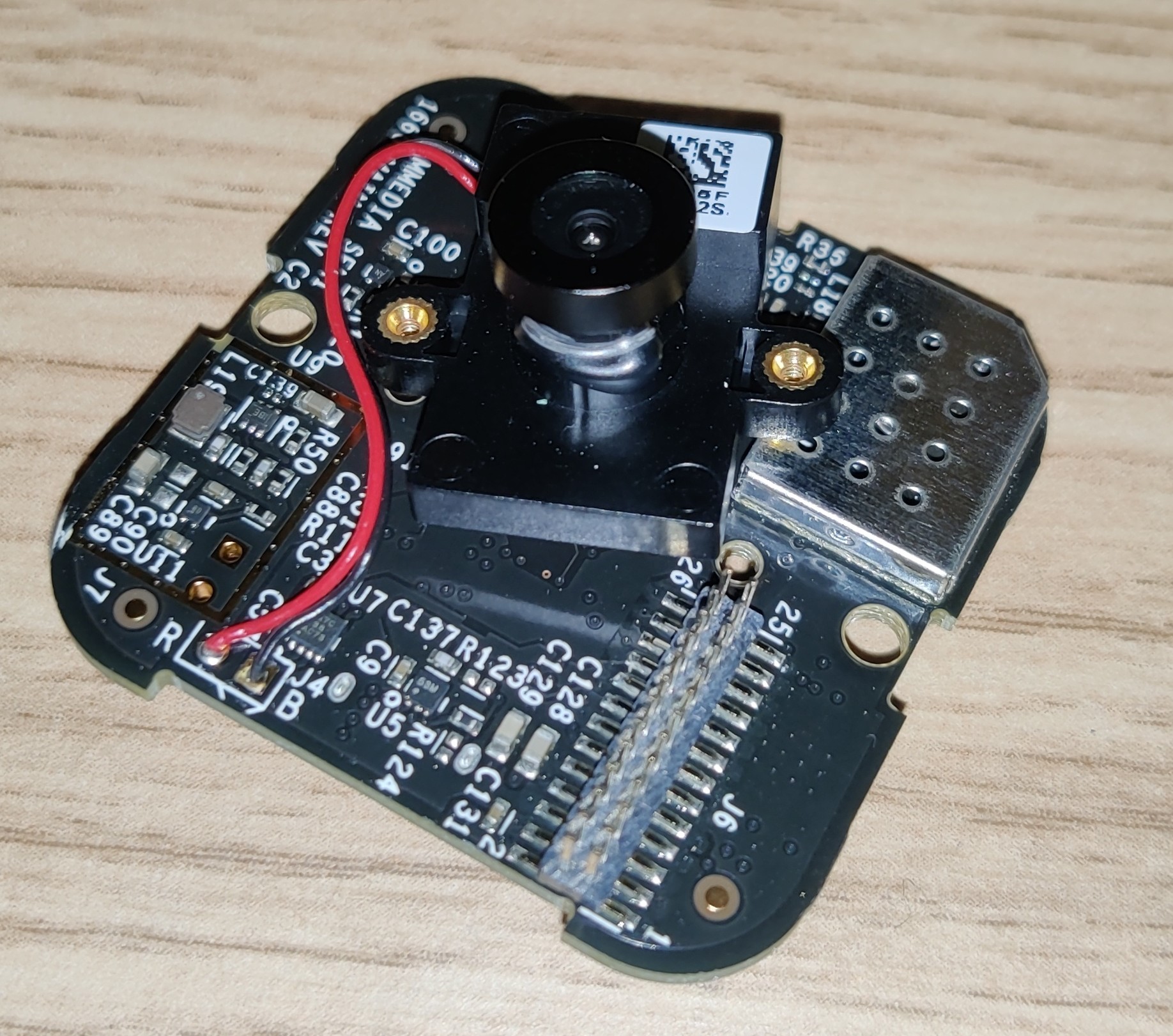 I looked around the two boards for some ICs with markings. Here are some interesting things I found. Their LinkedIn says that they are “a leading provider of video and image processing chips for connected camera applications.” Hey, that’s what I have!

There’s another article that associates them with Blink.

Finally, I found this Reuters article that says that Amazon bought Blink and Immedia for $90 million. Vertical integration, of course. Underneath this shield is this interesting little BGA chip. The markings say:

Searching for AC1002B2-FB, I found a bunch of weird international sites with ordering pages for the chip. They imply that Broadcom makes these? Dropping a few letters off the end, though, I found a couple of results for AC1002B, but they are mostly just reviews for a different Blink camera. On the bright side, this confirms that this unit is indeed the CPU.

From that review, they say that the AC1002B is Immedia Proprietary, and has 4 cores and 200MHz, which means it packs some serious power for what it is!

And searching for J-2104 yields nothing either.

Google is not giving me any results for this stupid chip besides marketing materials and Blink-related advertising. The closest I got to a datasheet is this CPU, but it seems to be QFN rather than BGA, plus the performance specs are all completely wrong. I’ll just email those sketchy sites to see if they’ll give me anything.

This is the juiciest part that I found. The markings say:

The chip says WinBond 25Q32JWIQ. Looking it up, I found this Winbond datasheet for W25Q32JW flash ROMs, with a table that says that 25Q32JWIQ is the WSON-8 package version of it. There seem to be traces leading from the ROM to the CPU, which further supports my hypothesis that this ROM contains the firmware that we want. 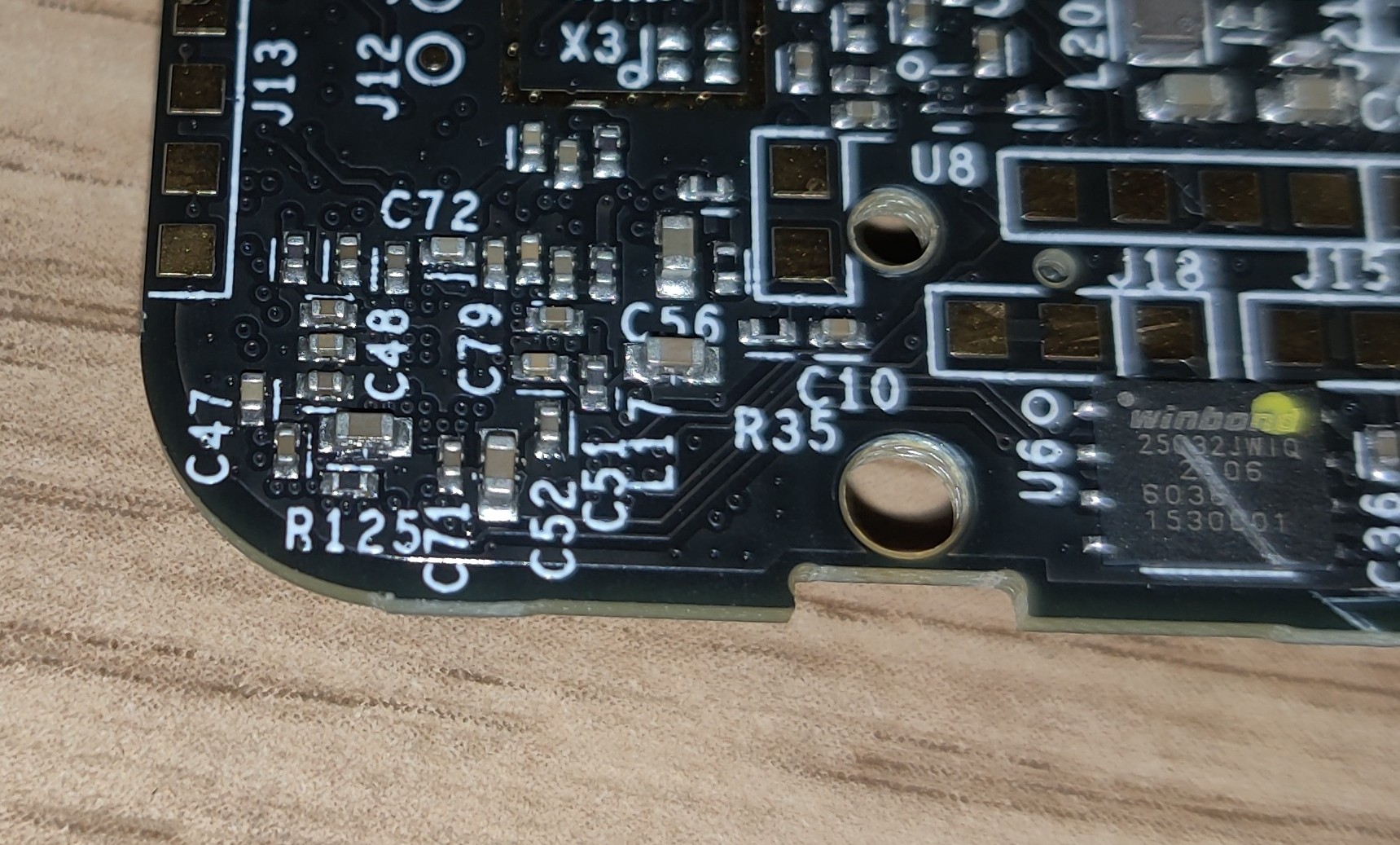 The W25Q32JW datasheet says that it is a 1.8V 4MiB SPI NOR-flash chip. Unfortunately, it also says that it is possible for you to make some blocks of memory permanently read-only. If we can get a dump from this fucker, we will find out! And that’s the hard part, because I don’t know shit about that!

Please note that I have no idea what I’m doing after this point.

My first thought was to desolder it, then stare at the datasheet and interact with it using an Arduino. However, it seems that every SPI flash chip has has the same pinout, and their instruction sets share similar commands for basic things, like reading and writing.1 Also, Ada suggested that the NOR flash would probably tolerate being dumped in-circuit with a test clip.

Thankfully, there’s a million cheap SOIC-8 kits on Amazon that come with everything I’d need: SOIC-8 clip2, USB programmer, and a bunch of other adapters. Unfortunately, the USB dongle thing was like, 3.3V and 5V only? But I looked around a bit harder and found some kits with 1.8V adapters. This Indian guy on YouTube explained how everything fits together, and how that weird slot-machine-looking adapter worked, making me a bit more confident that I was buying the right tool.

Hypotheses now, as I wait for the programmer to arrive

I’m probably overthinking. I should just be patient and wait for the flash dump.