This article describes how I got a NixOS install working with multiple encrypted ZFS disks.

Skip this part if you don’t care about me.

I finally installed NixOS on my (formerly) Arch Linux laptop. Doing so presented a couple of challenges. 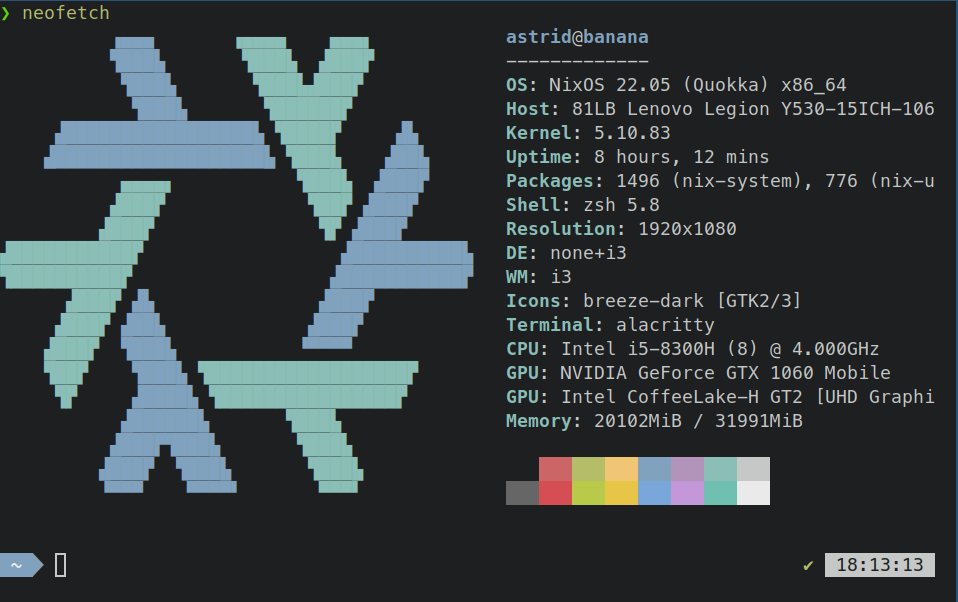 The biggest one was the fact that it had an interesting combination of drives that I wanted to install ZFS on:

They run at different speeds, and are of different sizes, so it would not be a good idea to have a single zpool with both disks in it. So, I put them in separate zpools.

However, I wanted to encrypt both disks because security is very important.

How to do it

We’ll assume that you’re in a NixOS live USB.

Because it’s not a good idea to directly encrypt the pool root, this is the planned layout for the ZFS pools:

Setting up encryption for bigdisk

To create bigdisk/enc (do not create homie/enc this way!), run:

Enter in your desired passphrase and you’ve created the encrypted subtree.

Creating and mounting / and /nix

Note that -o mountpoint=legacy is there to have NixOS manage the mounting, rather than having ZFS mount things for us. Additionally, note that we did not have to specify encryption settings, because the parent pool is already encrypted.

Setting up encryption for homie

We are going to have ZFS decrypt homie/enc by reading a passphrase from a file (see footnote1 for why this must be done). First, create your passphrase by writing a random string of characters to a file:

You can technically use raw bytes for this, but I opted for alphanumeric ASCII chars so that I can store it in a password manager and potentially recover it if I ever lose that file.

To double-check that you can correctly load and unload the key:

At this point, you can pretty much install NixOS like normal, with configurations following the ZFS guide on the NixOS wiki.

To fix this, run

What should happen when you reboot