Continuing from my last post about the QR code tattoos, my package of temporary tattoos arrived from StickerYou on Thursday: So, I eagerly I cut out the tattoos and pasted them onto my skin.

The instructions to paste them on are quite simple:

The first one I attempted was the 2.75” one, applied to my upper right forearm where u/bgrnbrg placed his. Unfortunately, as you might be able to see from the image, it was way too big. It ended up wrapping around my skin somewhat, and was therefore unable to be scanned.

I removed it (I did not need baby oil, actually, I could just peel and rub it off), then tried on the 2” one. That fit quite well, and was able to scan. I also applied an AR marker to my skin, as you can see. On the AR playground, it worked quite well! As a last test, I tried on the 1.75” tattoo at the center of my left forearm, approximately where u/Odd-Care placed his:

Again, this was able to scan perfectly fine.

As a control, I generated and scanned a 21x21 dot QR code on my computer screen as a control subject. Then, I proceeded to use the app to scan both codes.

Every app was able to scan the control code from my monitor. Additionally, all of them except for Snapchat were able to scan the QR code. However, some trials appeared to have a delay in scanning (i.e., they needed a certain angle, and I had to move my arm around to get that angle). The 4 trials where this happened were:

The likely cause of this may have been that the mid wrist is much more textured compared to the upper forearm.

On Friday and Saturday, at various club meetings and outside, a lot of people noticed my tattoo. It seems to serve as a fun conversation starter, which is very helpful as someone who is socially awkward as fuck.

If not for the fact that I already have a job lined up for next year, I would probably go to the Cal Poly Career Fair this year and show off my QR code on my arm, too!

Making my own AR webapp

The AR playground was not enough, so I went further. Last night, added more AR markers, but to my hands this time. 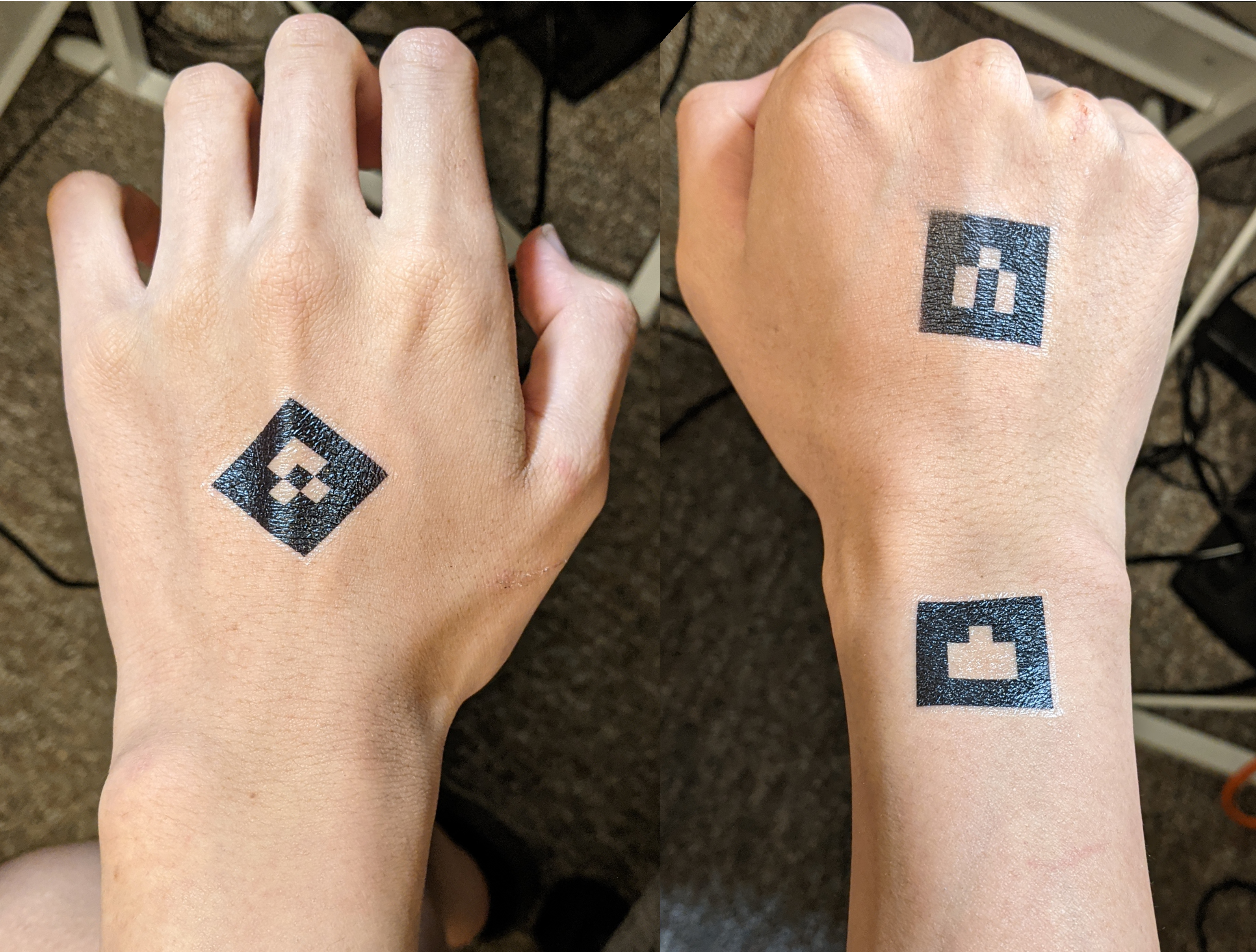 Then, I made a quick-and-dirty test webapp by essentially taking Nicolo Carpignoli’s code, adding some custom GLTF models downloaded from Sketchfab, then modifying the code to point to those models. My code is located here, and the webapp is located here. Today, I did a lot of meal prep, and it seems that as a result, those AR markers on my hands ended up wearing off somewhat. However, the ones on my upper forearms were completely unaffected.

I think it was because I was using oil, and as the instructions say,

4. To remove wipe skin with baby oil and wipe away with a cloth.

Though this is only a property of the temporary tattoos, I can imagine that permanent tattoos on my hands would not last as long either because they rub against a lot more things.

I’m really happy that this worked, and it worked so well! I’m definitely gonna make this permanent!