I have these Z506 speakers that I got for cheap on eBay a couple years ago. They worked pretty well until one day, the audio was extremely loud and the potentiometer was not able to turn the sound down, so I had to either run my audio at 4% or not at all.

That’s not good. Let’s fix that!

Wild Conjecturing as to What Went Wrong

I’m not an audio or electrical engineer, but I had a few guesses as to what might have gone wrong.

I decided to open up the control speaker and check that first.

I removed the six bolts on the front, and slowly pried the case open. 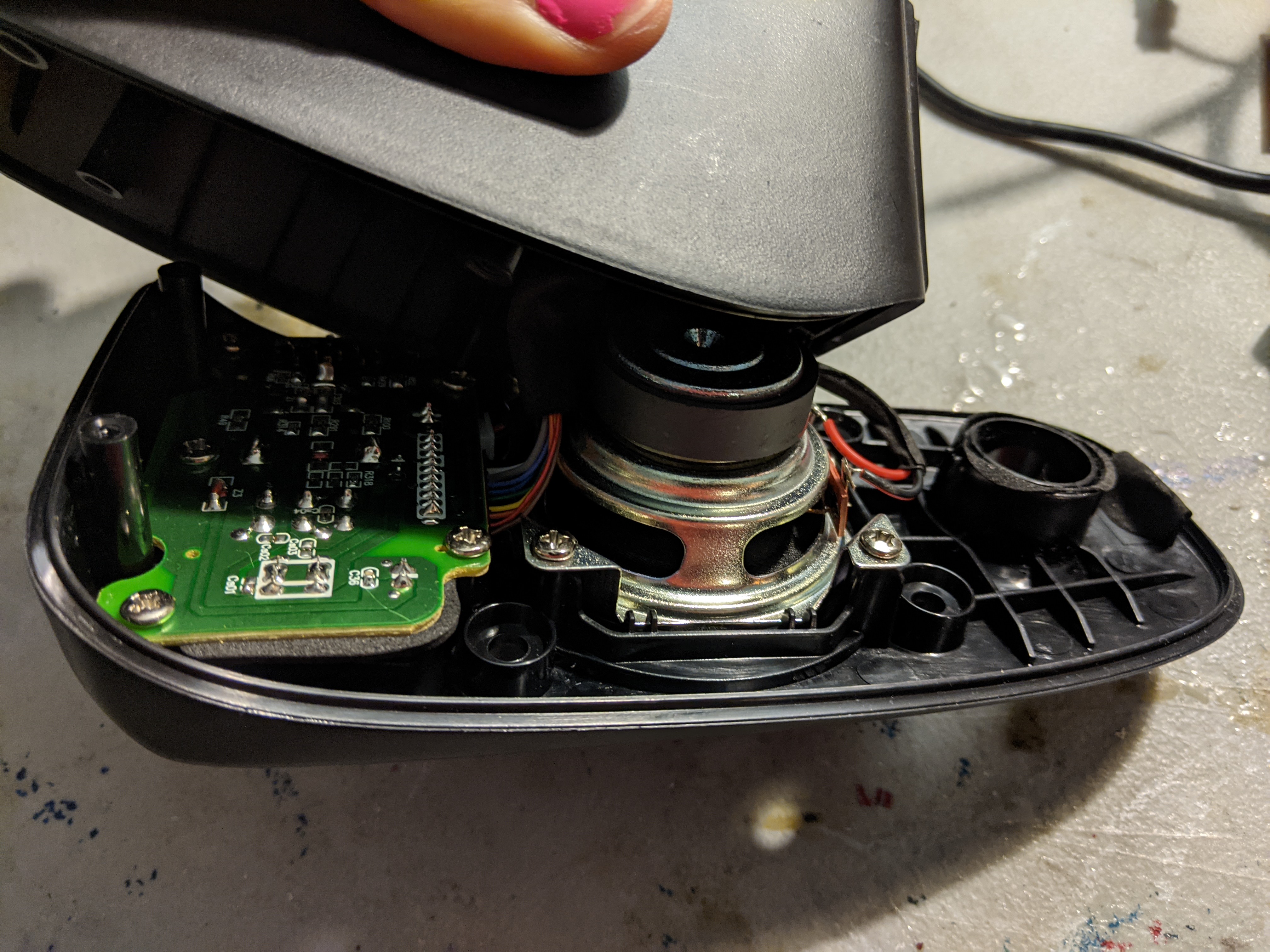 I pulled it fully open and disconnected the speaker and the connector. However, the case was still refusing to budge. 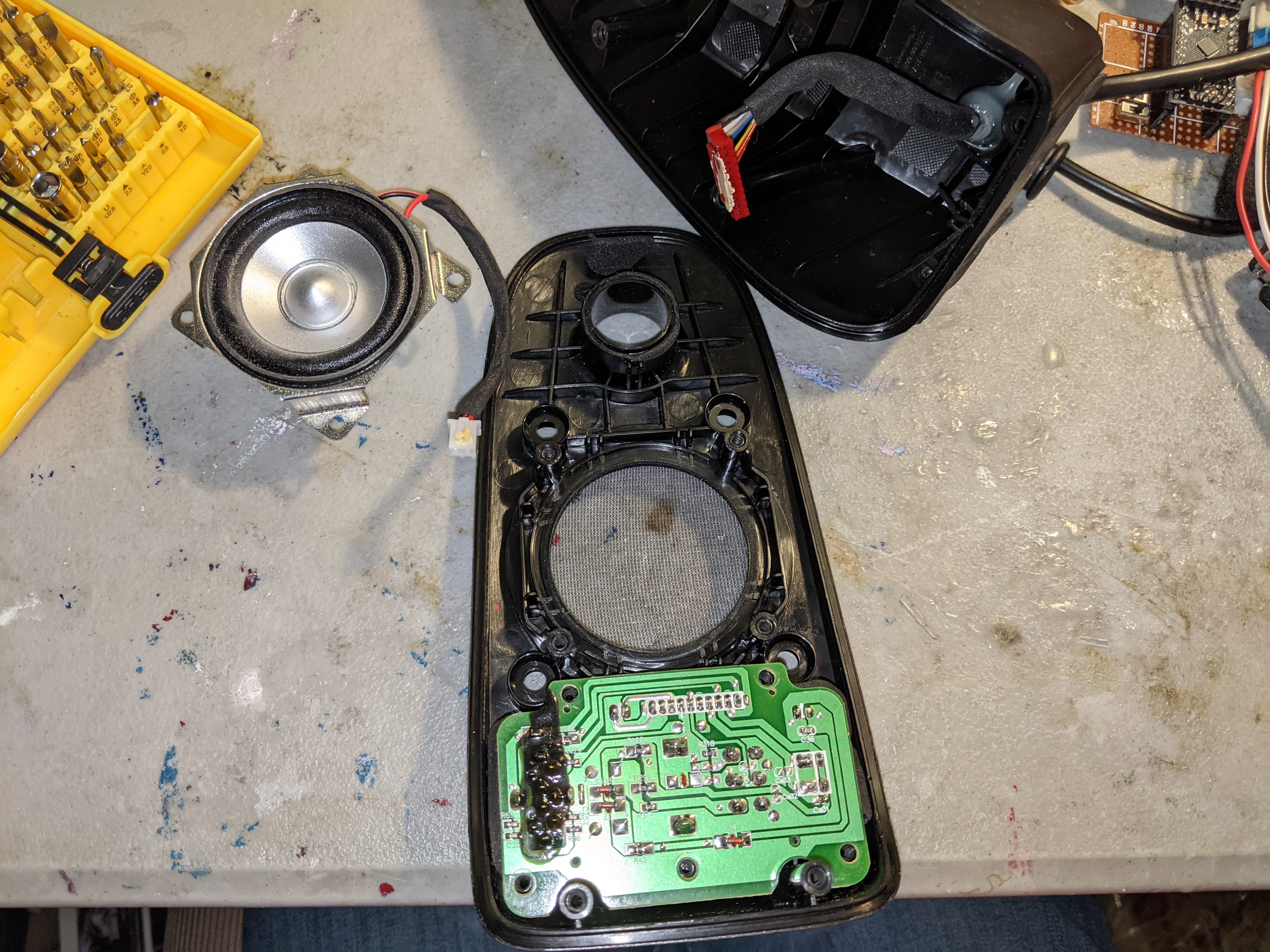 It turns out that I had forgot to free the potentiometer’s nut and washer on the front of the case! 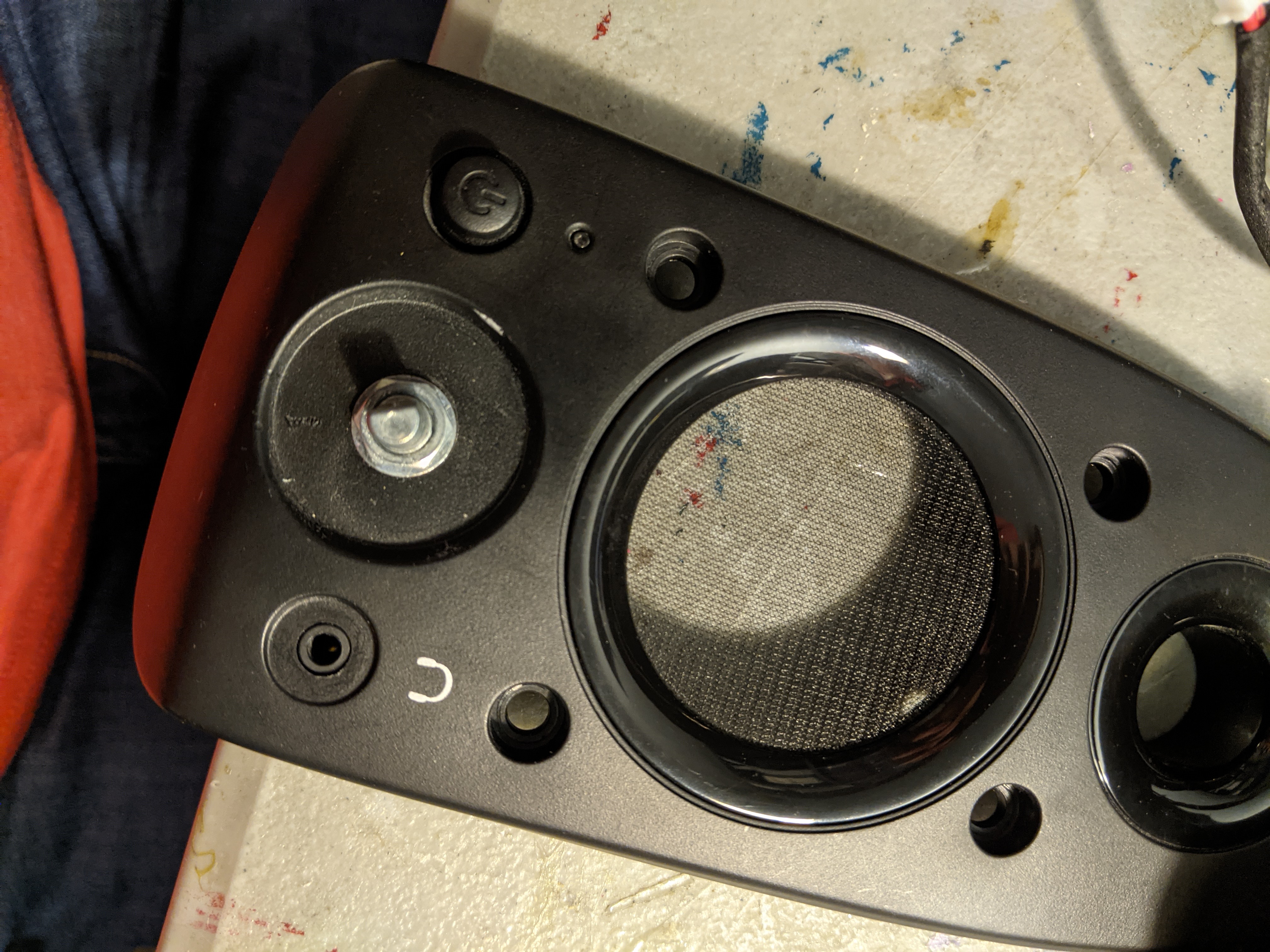 Getting rid of that made the chip much easier to remove. Staring at the Chip

Here’s what the chip looks like. This was a strange and very tall pot that I had never seen before. After a bit of research, I found that it was a dual-gang potentiometer. Essentially, that that means is that it’s pretty much the same as a normal potentiometer, but the same shaft controls 2 separate potentiometers simultaenously, one for each ear. 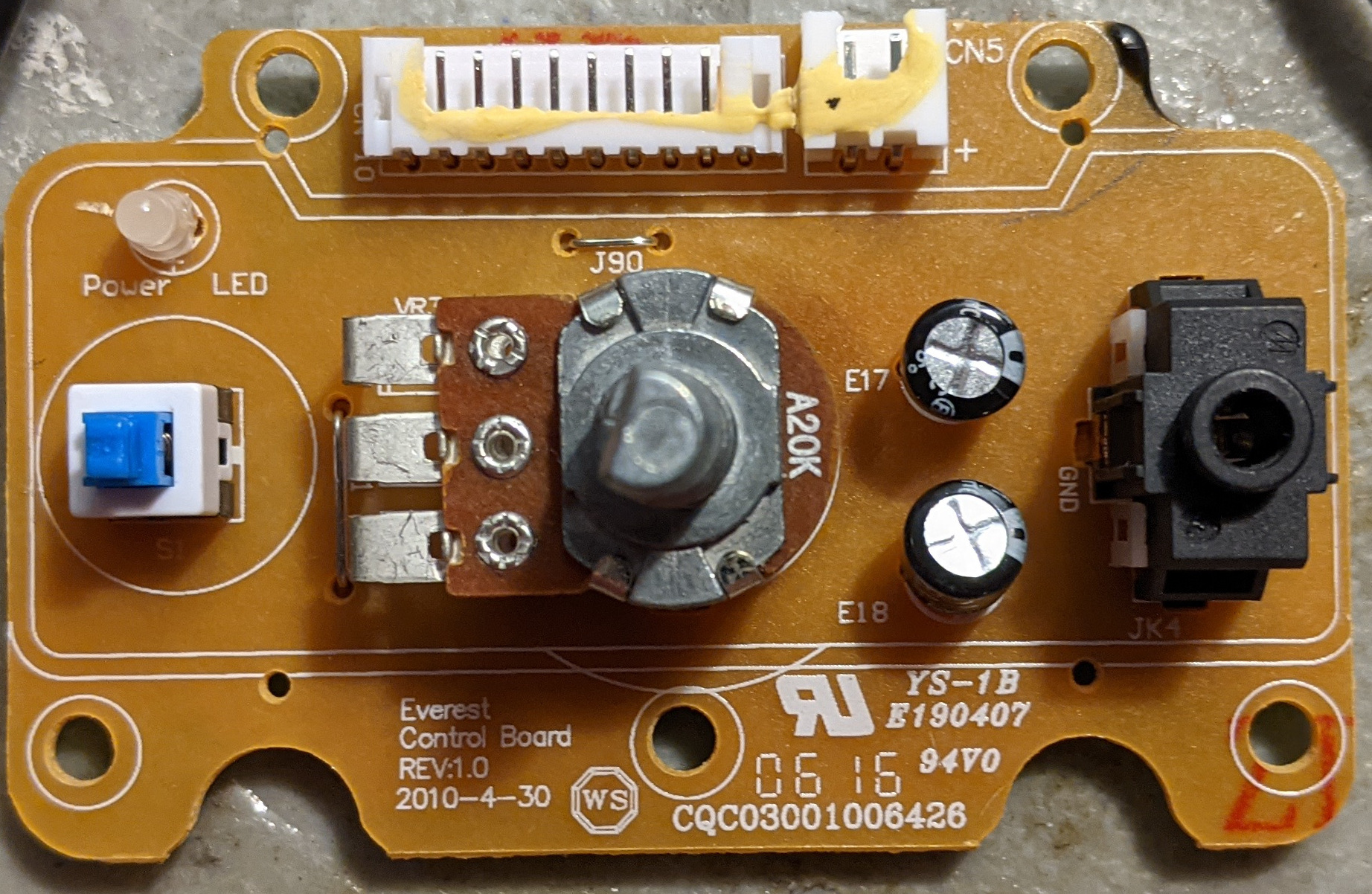 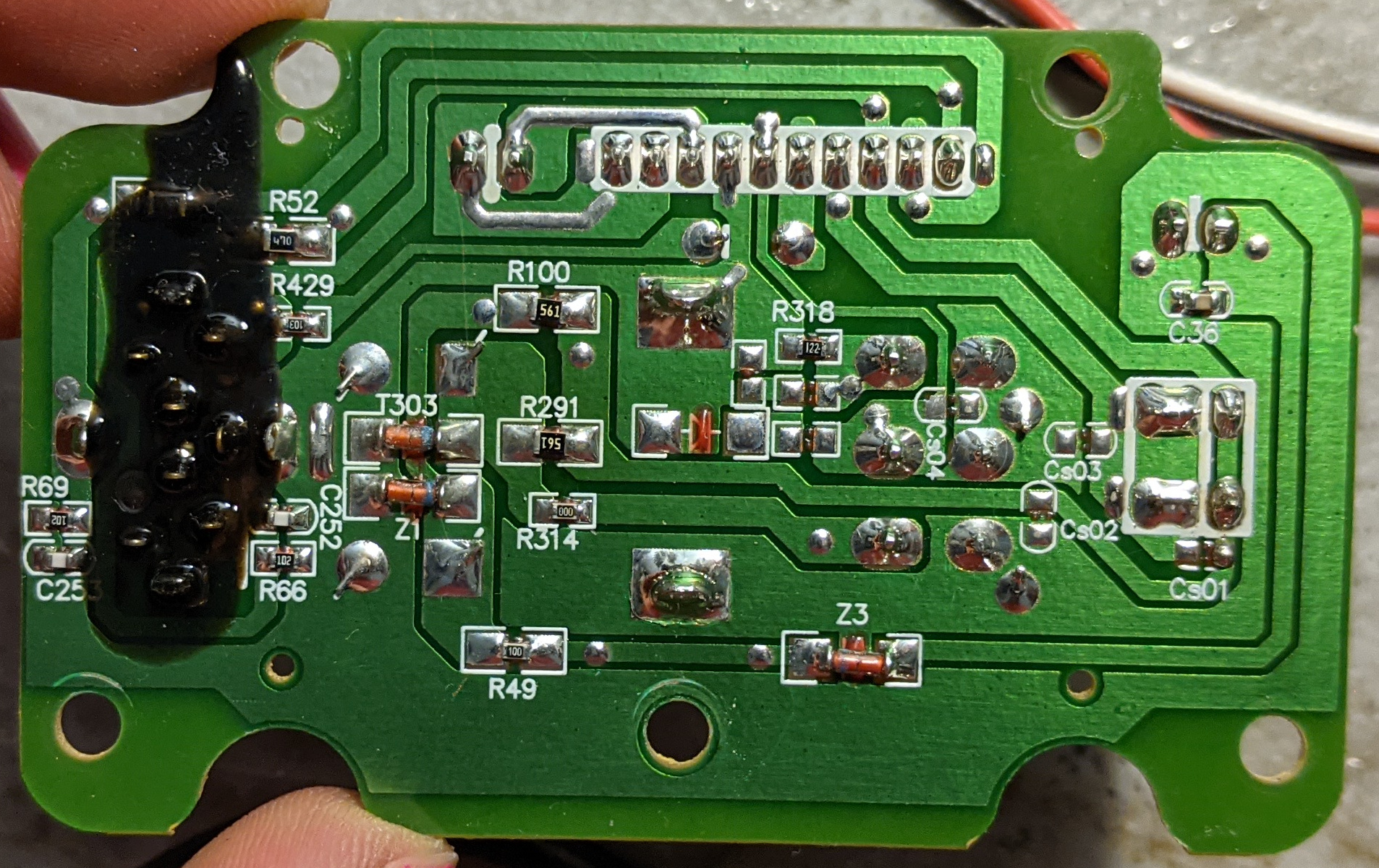 I began making measurements on it, to make sure that it was working. As advertised, this is was a 20kΩ potentiometer, give or take a kΩ. However, when I tried measuring the resistance of the middle leads, I noticed that the bottom one changed resistance as I turned the potentiometer, but the top one didn’t. I thought I was maybe measuring it wrong, or my leads were broken, so I swapped leads and noticeD the same thing. Very strange.

Rotary potentiometers have a wiper inside that moves when you spin the shaft, controlling the resistance. I stared inside, and saw that the bottom one moved as expected. However, I didn’t even see a wiper for the top one!

I thought my eyes were deceiving me, so I desoldered and pried open the potentiometer. And sure enough, the top gang was missing its wiper! It seems I’ll need to replace this potentiometer. I desoldered the rest of it off, and ordered a new one from online.

My initial guesses were both way off the mark. It was something even more basic, even more fundamental than some component somewhere frying: it was a mechanical issue inside the potentiometer.