In my last post had 7 things I wanted to do. Well, here’s a summary of everything I did so far. The IaC repo is here and the last commit before I published this article was d18736.

EDIT: It has come to my attention that I’m missing a picture. Anyways, here’s what the cluster looks like.

Monday 1/18: Setting up k8s and an Elastic stack

I woke up awfully early that morning at 5 AM, way earlier than I usually wake up. It was MLK day, so I didn’t have classes, and so I decided to spend the day setting up Kubernetes. I started out with 2 machines, both running Debian Buster Stable:

I basically spent from 5 AM until 9 PM trying to set up k8s1 the Proper Way ™️ on those two machines and it was painful and it didn’t work for some reason.

But then, I learned about this cool thing called k3s, which is like a much more lightweight version of k8s. That’s perfect, because my machines are all very cheap and have very few resources. Additionally, someone made a very simple setup utility that sets everything up on a remote for you, so I got k3s up around 10 PM. So, I could check tasks #1 and #6 off.

The whole reason I was doing this in the first place was to get an ELK2 stack set up. I only got the E and K before I set up MetricBeat to record system metrics like memory and CPU usage. I got everything set up around 3 AM, then I felt really tired and went to bed. I guess that’s part of #2 (proper centralized logging) checked off.

The next morning, I woke up at 8 AM in pain because I did have class that day. Before class started at 9 AM, I set up Kibana to make cool graphs from the MetricBeat data collected overnight. 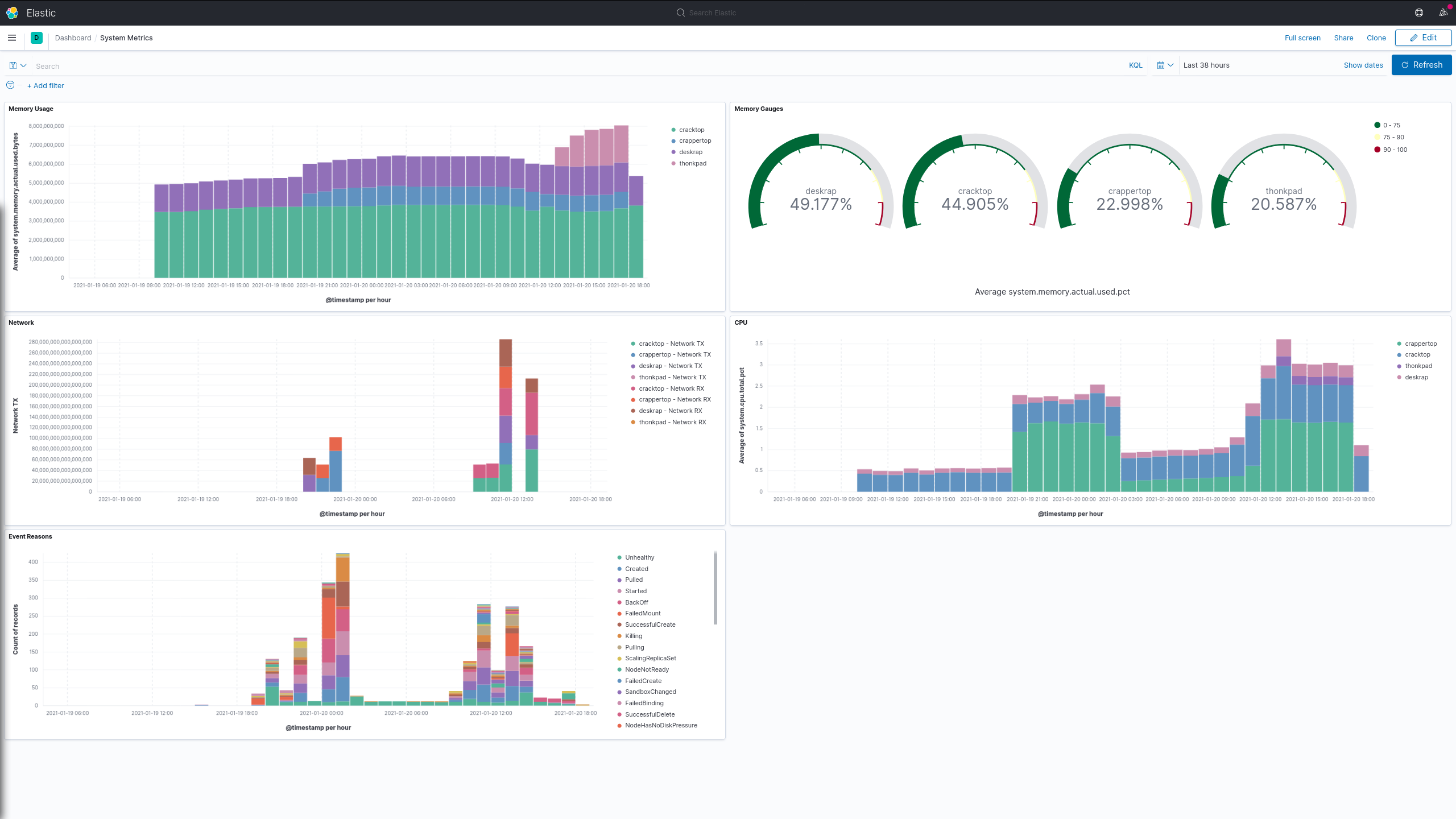 After class, I went on the the second order of business, which was setting up those private apps like Firefly III on Kubernetes. I successfully migrated the persistent MySQL container data off of the VPS and onto deskrap, and after much finagling with configuration and secrets, it surprisingly worked without any data corruption.

After bombing an interview with Facebook, I got ahold of my mom’s old Acer Aspire E1-510 that she didn’t need anymore. It was running terribly slow because it was bloatware-infested Windows 10 on a HDD. Even after I installed Debian Buster Stable and k3s and named it crappertop, it was still kinda slow, but it’s fine; there were 3 nodes on my cluster and quantity > quality here.

At the very end, I got FileBeat running on a DaemonSet pod to forward all container logs into Elasticsearch. I felt satisfied, then went to bed at around 2 AM.

Wednesday 1/20: Expanding the cluster further, then realizing I made a boo-boo

Today, I added another machine to the cluster: a Thinkpad T420 that I got used off of eBay for a different experiment than deskrap. Once again, I installed Debian Buster Stable, named the Thinkpad thonkpad, and hooked it up to the rest of the k3s cluster. I also learned how to deploy containers with Helm charts, and declaratively deploy Helm charts with Helmfiles.

Sometime in the afternoon, I was trying to set up a VPN system so that I could access my containers behind authentication. I learned about Wireguard and how it’s much better than OpenVPN, but when I tried running apt install -t bullseye-backports wireguard on my machines like the instructions told me to, it couldn’t find Wireguard. It turns out that Debian 10 uses Linux kernel 4.19, which is too old for Wireguard. So, I had a small existential crisis before accepting my fate of having to go to all four machines and reinstall them with a different distro.

So that I don’t have to physically pull the machines onto my desk and use a USB stick as I have been doing, I decided to install Proxmox instead. Proxmox is a hypervisor, so I have to spin up a VM inside of it. However, I’d be slightly cheating; these machines are all so resource starved, I’m just gonna install a single fat VM on each of them and hopefully not experience too much overhead.

At first, I tried setting up OpenSUSE Kubic, which is a distro with k8s preinstalled for you. Then, I learned about K3OS, and installed that instead because, once again, I’m rather resource starved. While I was doing that, I was trying to set up Proxmox on deskrap, but the USB installer kept crashing. Maybe that machine is just too old/shitty for a modern hypervisor.

Now, as I’m writing this blog post, I’m trying to figure out how to move the elasticsearch data off of cracktop, which is the last node I have not attempted to install Proxmox on yet. I will say one thing, though: DevOps is frustrating. So much YAML-staring and hoping and praying things will work. I can only hope and pray at this point that the end result will be something I can be happy about.